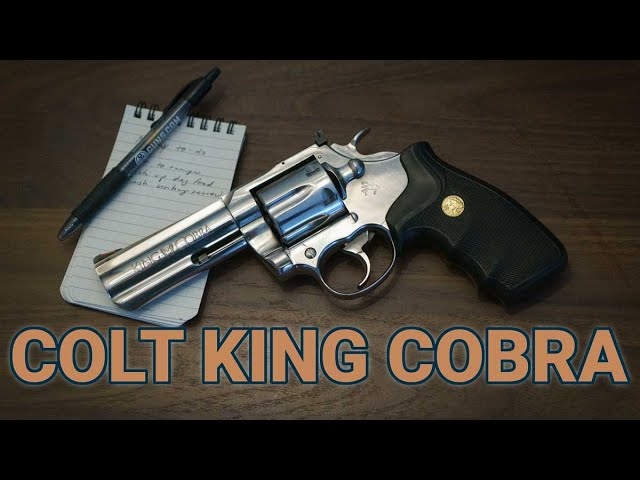 Let me start this review by saying I was never a big wheelgun fan in the past. I should also clarify that I can count on two hands the number of different revolvers I’ve fired in my lifetime. I’ve shot newer models like the Colt Night Cobra and the older Smith & Wesson J-Frames. From what I remember, I just never liked the long double-action pull that is common with these defensive revolvers. This, paired with a smaller capacity than similarly-sized semi-auto pistols, has always turned me away from wheelguns.

However, when I got a chance to review an older model Colt King Cobra, I jumped at the opportunity. I’ve always heard great things about old Colt revolvers, and let’s just say this gun made me think twice about my stance on revolvers.

Before we jump into how this gun shoots, let’s take a little stroll down memory lane. The Colt King Cobra was an upgraded version of the Trooper Mark V lineup. It was revolutionary for the company when Colt introduced it in 1986. This was the first revolver to be introduced in a stainless-steel version before it was introduced in a blued version. Building off the success of the Python, Colt decided to go with another snake name. However, unlike the Python, the King Cobra has the iconic cobra head stamped on the barrel.

The King Cobra is chambered in .357 Magnum and is available in barrel lengths of 2.5-, 3-, 4-, 6-, and 8-inches. The 3-inch variation was actually incredibly rare in 1986 and under 50 were ever made. Ironically, Colt made the 3-inch model a featured barrel length when they rebooted the revolver in 2019.

While the Cobra, like the Python, has enjoyed a raving fan base since its inception, the production of the gun has been a rocky road. It was introduced in 1986 and manufactured until 1992. It was then picked back up in 1994 and discontinued again in 1998. Colt, hearing the groans from its legion of fans, decided to put it back into production starting in 2019. You can continue to purchase new King Cobras today.

Why King Cobra Revolvers of the ’80s Are Supreme

If you compare a new King Cobra to one of yesteryear, especially from the 1980s, you’ll immediately notice a couple of notable distinctions. For starters, the new King Cobra is missing one of the most iconic parts of the Colt revolvers, those golden Rampant Pony medallions in the grip. You’ll also notice that the target rear sight has been ditched for a u-notch and interchangeable front sight.

Perhaps those aren’t the main ways the new revolvers differ. There are stories about how the older King Cobras were hand-polished and generally hand-fitted. Young men, just out of high school, would apprentice at Colt and work there for long careers, some pushing well over 30 years. They treated every revolver like a work of art. When holding and firing this revolver, you can certainly feel that love and attention to detail.

The Pachmayr “Gripper” grips work well. I’m not normally a huge fan of finger grooves on a grip, but these feel custom made for my hands and fit perfectly. The thick rubber grips also work well for mitigating the recoil of the formidable .357 Magnum cartridge. Shooting .38 Special was a dream and felt more like shooting .22 LR. Still, .357 Magnum never felt overpowering.

You can find the original King Cobras with both the dark rubber Pachmayr grips or a checkered walnut variation. Both of these have the iconic gold Colt medallions in them. It’s a classic touch for a classic gun. The medallions are just one more reason people still seek out these older models when there are even newer King Cobras available.

While I didn’t do any accuracy testing with this gun, I felt like it was as accurate as it could be with my experience level. It pointed well and getting on the sights was a breeze with the orange ramped front sight and white u-notch rear sight. The rear sight is adjustable for windage and elevation for shooters who really want to dial it in.

How This Gun Fits In

While a 4-inch, .357 Magnum revolver would be a bit much for me to carry, I’m sure there are those who choose to do so. But that’s not where the gun would fit in for me. I think of this revolver as a classic Colt collectible. However, unlike other collectibles, this is one where you can take it to the range and have fun with it. It’s a great shooter and shouldn’t be relegated to the shelf to collect dust.